Snoring refers to the snorting or rattling noise made by an individual during breathing associated with sleep. It is produced by the vibration of the soft palate and other soft tissues in the mouth, nose or throat. Snoring can be soft and infrequent, or loud and frequent, varying with the individual. Snoring can be graded based upon specific features, and snoring severity increases with the grade.

There are three sounds associated with snoring when the power of the sound is examined. The duration of each sound depends on the vibrating tissue. Thus vibration of the soft palate produces the longest sound, followed in length by the epiglottal snore and the base of the tongue. It is important to note that in obstructive sleep apnea (OSA), these sounds are combined with more or less complexity, and occur concurrently.

Automated analysis of snores has been attempted and involves classifying the sounds in sleep into three: snoring (‘voiced non-silence’), breathing (‘unvoiced non-silence’) and silence. These are segregated with respect to four features. When combined with noise reduction and feature selection, the technique lends itself to automation by achieving an accuracy of almost 97 percent.

The vibration of different parts of the throat produces different types of sound during snoring. When the soft tissue of the nasopharynx is involved, the sound is soft and nasal in quality. Vibration of the soft palate and uvula, in contrast, produces a guttural and loud snore which is characteristically throaty. In most snorers, more than one area is involved in the vibration. Tonsil enlargement can also cause snoring. 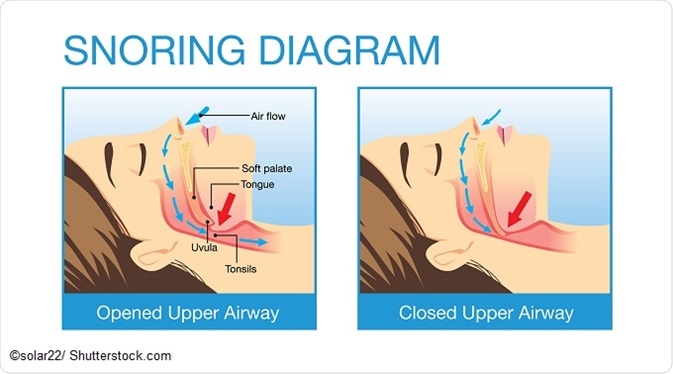 Snoring occurs at peak intensity during stage 4 sleep, or deep sleep, which usually occurs 90 minutes after the onset of sleep. The position of the sleeper also influences snoring, with the loudest sounds occurring when the individual is lying in the supine position. The sound occurs during the stage of inspiration.

Sleep produces muscular relaxation which includes that of the throat and airway muscle. This causes constriction of the airways, which increases the velocity of air movement during expiration, and alters the air pressure in the air passages. This in turn causes the sides of the passages to collapse slightly inwards, which promotes soft tissue vibration because of the inrushing air with the next inspiration.

When the airway is partially obstructed, as happens with tonsillar inflammation or colds, the same effect is produced, accounting for the onset of snoring with such conditions.

Snoring damages the vascularity of the muscles that are involved, leading to their weakening and further airway narrowing. This means snoring will worsen over time unless treated.

Snoring is more likely in the presence of: